It wouldn't seem like ferret diseases could slow down these bundles of energy, but unfortunately, there are a number of common illnesses that prove fatal to them.

There isn't much you can do to prevent your little one from contracting one of these illnesses, but you can be on the lookout for some signs and symptoms that can help you get early treatment. 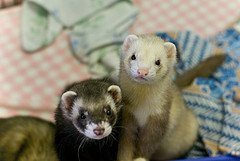 Not surprisingly, females tend to suffer from the disease more, as do ferrets three years or older. One of the most common symptoms is hair loss, especially around the tail. Other signs may include lethargy, weight loss, excessive scratching.

Surgery is the most effective method of treatment, and is used to remove the tumors from the glands. However, for ferrets that are older or that are determined to be unlikely to survive the surgery, medication can be prescribed to treat the symptoms.

Ferrets are curious critters, and they like to get into and nibble on everything.

Unfortunately, their tiny little bodies can't process everything they might get into - items such as small bits of foam or rubber from toys or balloons. These items will often get stuck in their small intestinal tracks (about the diameter of a ball point pen), and it symptoms may manifest as other illnesses, such as liver disease.

Signs include poor appetite, dehydration, vomiting, lethargy, lack of defecation, constipation, scratching at mouth, and finding bits of foreign objects in the stool.

In some cases, medication may be given to your ferret to help pass the object, but in more severe cases, surgery may be required to remove it. Your ferret will also likely need to be treated for dehydration. One of the best defenses against blockages is to "ferret proof" your home as best you can.

Keep your floors clean of debris, close doors, lock cabinets, and keep a close eye on your ferret during play.

This ferret disease is similar to adrenal disease, but the tumors grow on the pancreas in response to excess insulin. The tumors then also produce more insulin. As in adrenal disease, symptoms can include lethargy, weakness (especially in the hind quarters), and a loss of appetite. Seizures can also occur. Surgery is recommended to remove tumors, or medication can be prescribed for older ferrets who aren't deemed likely to survive surgery.

Focus on proper diet to try to prevent - or later manage - this illness. A low-sugar diet should be emphasized.

Really, it's a common ailment for all animals (even the human kind). Even though they seem so small and so full of energy, their hearts can become unhealthy, too. The most common symptoms include lethargy, weakness and loss of appetite (a common set of symptoms), as well as rapid heart rate and rapid breathing.

Treatment includes medication to reduce liquids around the heart and to relax blood vessels so the heart doesn't have to work as hard. Of course, exercise and a healthy diet are some of the best medicine, as well.

Don't let the name fool you: this disease is common in ferrets, as well. Fortunately, rabies is not common, but this disease is, and it is nearly 100 percent fatal in ferrets. Common symptoms include a smelly green or yellow eye and/or nasal discharge; swollen eyelids, lips or chin; loss of appetite; lethargy; weakness; dehydration; diarrhea; convulsions; and difficulty breathing.

Unfortunately, there is no treatment for this disease, and euthanasia is recommended to prevent the spread of the disease to other ferrets. The virus is airborne, so your ferret can contract it by inhaling it from your clothing. Be sure to isolate new dogs or ferrets in your home for at least 2 weeks, as the incubation period for the disease is 10 days.

This is a guest article by Lisa Shoreland. She is currently a resident blogger at Go College, where recently she's been researching academic scholarships as well as applying for merit based grants. In her spare time, she enjoys creative writing, practicing martial arts, and taking weekend trips.