Like to read interesting animal facts? I love them. Some of them are really funny some actually serious. But all of them definitely interesting.

For years now I have been learning and reading about pets. And every once in a while I run into an interesting animal facts. I beleive I have hundreds of them.

Since this is a pet site I will share some pet facts here. Oh, I said "we will share"? Yes, you and me. Feel free to add any interesting and funny pet fact you know about. 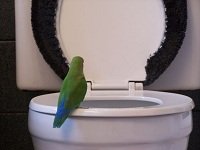 Facts sent by you

Tannis: A pregnant goldfish is called a twit