There are over 60 Guinea Pig breeds which vary in terms of characteristics such as color and hair length. There are even show breeds judged by organizations such as the American Cavy Breeders Association. Guinea Pigs or Cavies (scientific name is Cavia porcellus) are gentle pets. They are known for their social personality and size, since they are larger than similar pets such as hamsters or gerbils.  They are used to live in groups and rarely if ever bite.

The most popular breeds are listed and described in alphabetical order below:

First, I need to say that these guinea pigs look very cute and funny. All thanks to the coat. Their coat has what guinea pig experts call rosettes or in simple words - swirls and ridges. Rosettes are clearly defined with "show" pets having a minimum of 8 rosettes. The hair is not long nor short. 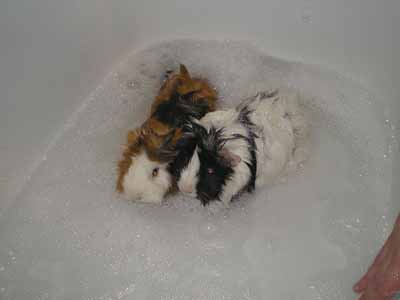 Abyssinian Guinea Pigs are characterized by the distinct ridges and rosettes on the coat.

Some call them English cavy. This is the breed you are most likely to find in pet shops and is the most popular. It has short, smooth and straight hair that lies flat on the piggy's body. The nose is referred to as being "Roman" with a head that has a high full crown. 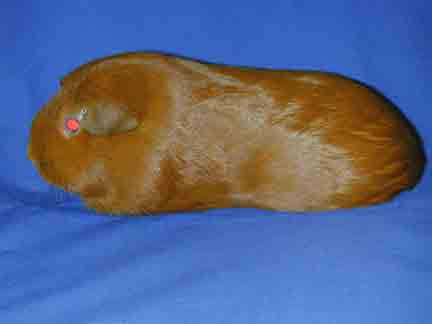 This American Guinea Pig Breed is the Most Popular. Pictured is an American Red

The American guinea pig satin variety is different because of the shiny coat. Very nice and soft when you feel it. They come in all colors. 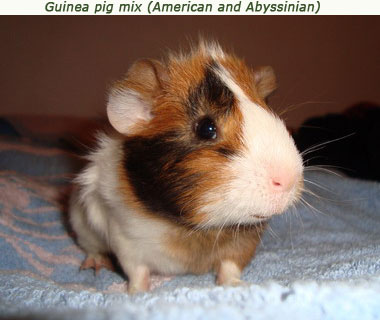 Coronet is a long haired guinea pig that has a single rosette on the head and a very soft coat. He is something like a mix of a silkie and crested guinea pig. He needs a lot of hair care. Show level Coronet Guinea Pigs have a rosette located exactly in the middle of the head. 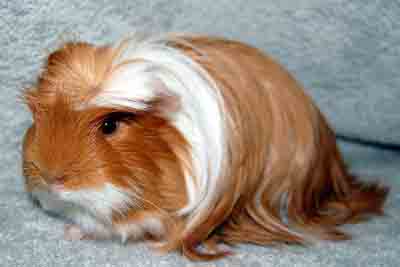 This one has short, smooth hair and one swirl on the head. You can find American and English crested varieties.

English one has the crest which is the same color like the rest of the coat. 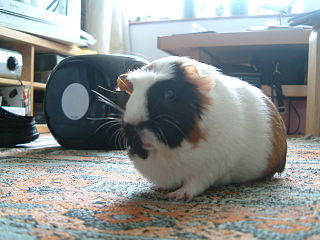 Peruvian guinea pig has straight hair, several inches long. It takes a lot of time to groom this pet. Described in simple words his hair falls from the top of the body to all sides. Hair length can grow to several inches. It can be good to cut their hair a bit at the back so it does not get dirty after piggy excreting or sitting in dirty places. This is one of the guinea pig breeds that might not be a good solution for a pet.

As Abyssinian and American, Peruvian also has a satin variety. 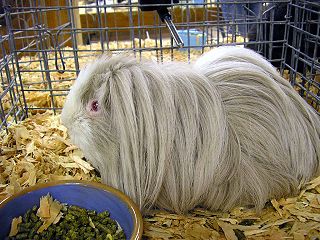 Silkie guinea pig has very long hair and it is very silky. The hair grows from the head towards the back. His face hair is shorter. Again, a satin variety is recognized. This guinea pig requires a lot of hair grooming like the Peruvian one does. 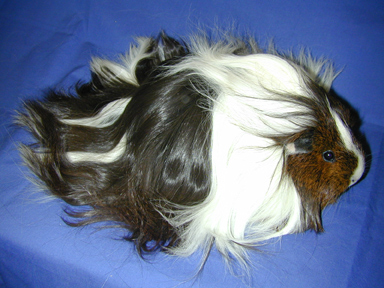 Again one (for me) funny looking guinea pig. This one has short and very dense kinked hair and his hair stands up so he looks very fuzzy. Members have this breed have a "Roman" upright nose. It is a popular breed in the U.S.

There is a satin variety, too. 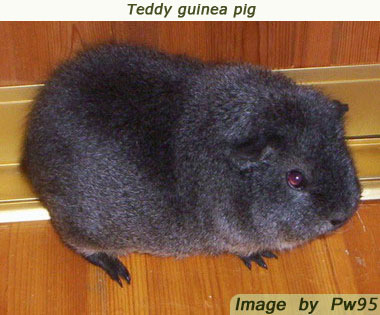 One very out of fashion looking guinea pig. Bad hair-do definitely (says a girl with short hair). Only joking. This is, however, very hairy looking guinea pig. It has wavy long coat. It will really take some money and time for the upkeep of this hair. 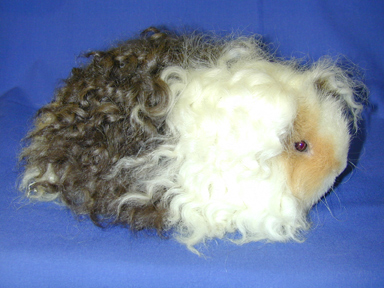 Some additional breeds that are less recognized but are out there.

Alpaca guinea pig is one of the long haired guinea pig breeds and has the hair growing over the face. Maybe he is related to the big South American alpaca?

Merino has long wavy hair and a crest. 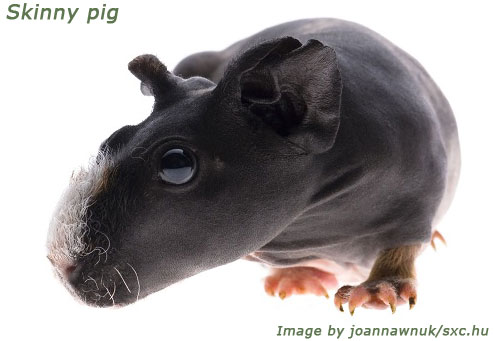 Skinny pigs have no hair except some on their face and feet.

Baldwins have no hair at all so you might want to get him a little sweater for cold days.

Besides guinea pig breeds there is one more important list to add here - color varieties. 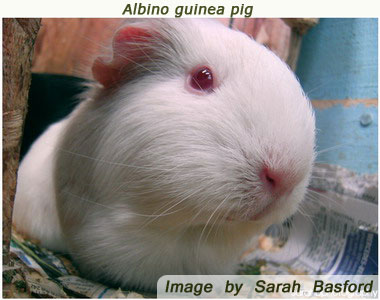 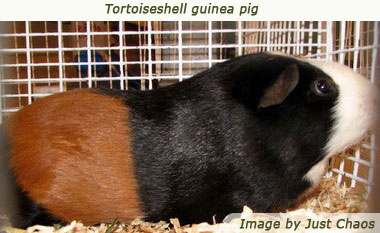 Have a Pet Question for our Vet? We'll Answer it for Free!

Would you like to ask our Veterinarian a question? Just ask and we'll get back at you with an answer from our Vet for free!

If you need an immediate response, we suggest trying this online veterinary service that is available now to answer your questions.