Parakeet egg laying is what you have been waiting for. You planned and organized breeding, you provided a parakeet nest box and finally the eggs are on their way.

Parakeet egg laying will start in about one or two days after the mating. Female parakeet will lay an egg every second day and there will be approximately 4 to 9 of them. 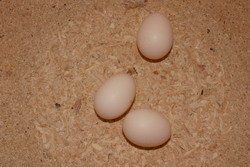 Once the female has laid the eggs you might choose to keep all or remove some of them. And how do you decide what to do? Based on your reasons for breeding parakeets.

To explain a little bit more. Some breeders breed parakeets to get good or new genetic combinations. Those breeders will probably remove some eggs from the nest. They remove them because they believe a female parakeet can not take good care of more than four to six chicks.

Breeders that are breeding to sell them will probably keep all the eggs, just to sell more birds later.

Why is it good to remove some eggs? Imagine if the female will lay 9 eggs, one every two days. That would make a period of egg laying 18 days long. It just would not have the time to feed all the chicks enough to make them all strong and capable of life.

Parakeet as a Mother

What could happen is that mother bird just kicks out some chicks that are not ready for life yet and they will die after a while. So it would be better to remove eggs while it is not too late.

One important point, I am guessing you live in a small space so think well how much space will you need for all of this. Maybe it is not such a great idea to breed parakeets in a small space. But if you do, think in advance where will you keep them all or who will you give the new birds to.

As soon as parakeet egg laying begins, female parakeet will sit on them all the time. Often, a male will come by. You can even see him sitting on the outside perch feeding the female through the round hole. In general, it would be better to just keep the male in a cage and let the female handle the eggs.

Parakeet egg laying can happen with the bird acting like nothing happened. If a female lays an egg and is not sitting on it, remove the egg from the cage.

While waiting for eggs to hatch, only the female will sit on them. She will do that for about 18 to 19 days when the first bird should hatch. The eggs need to be in a temperature close to the body temperature of the mommy parakeet. That would be 40 to 43 degrees Celsius (104 to 110 degrees Fahrenheit).

Never disturb the bird in the nest.

Once the parakeet chicks are out, check if everything seems normal and if the mother is feeding them. She will kick out all the egg shells from the nest so there is no need to touch the nest too much.

Now, since the eggs are laid every second day and there are 4 to 9 of them, what could happen is that the first hatched chick already has some feathers while the last one is just being hatched.

Baby parakeets grow very fast. As soon as they gain a little bit of strength they are exploring and climbing perches. The female will try to push them away and out of the nesting box because she is immediately getting ready for the next mating.

Baby parakeets will leave the nest once they reach 30 to 35 days. In about two months after hatching there are barely any differences between the parents and the chicks.

Pay attention to the female. As soon as the chicks are grown she will start pushing them away and getting ready for new mating. You should not allow her to mate more than 3 times a year. It would be too exhausting for a female parakeet.

How Long Will Parakeets Live?

Parakeets live an average of six years, but can live as long as 18 years. Medium size parakeets can live 20 or more years.

Well, now that you have a whole parakeet family and understand the parakeet life cycle, go get them some new toys to play with and start spending more time with them. I am sure they will make you happy. Knowing budgie parakeets as I do, I promise they will make you laugh a lot ? and laughing will give you a healthier and longer life.

From parakeet egg laying to more information on Parakeets
To Cool Small Pets Home Page
Like this page? Please share it with your friends: